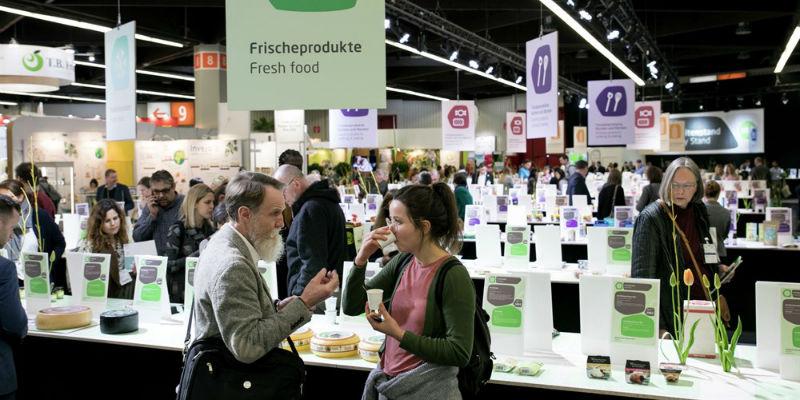 Submitted by Julianne Martin on October 22, 2019

There’s plenty of trade fairs around the world focused on organic foods and products, such as Paris’ Natexpo or Dubai’s Organic Natural – big, respected trade shows that bring together thousands of visitors. And yet all of them pale in comparison to Biofach, by far the biggest and most recognizable name in the industry, which prides itself on hosting six different events a year around the world and continuing to break record after record with each one of them. The main edition, taking place every February in Nuremberg, is also the largest, with more than 51,500 visitors (50% of which from outside Germany, representing 142 other countries) paying it a visit. Most other global shows don’t even come close!

But it’s not just the visitors that make it specials – more than 3200 exhibitors attend the show representing every single major organic food brand in the world, and in addition to that more than 9500 delegates participated in the Biofach Congress, making it the single most influential discussion forum for the entire industry. The facts don’t lie, and they clearly show just how influential the trade show has become not just in Nuremberg, but around the globe. So today, mere months away from Biofach 2020, let’s take a look at the expo’s various editions around the world and determine what makes each one – and the event as a whole – so special and integral to the industry!

A Trailblazing Event in the Healthy Food Movement

The upcoming edition will actually mark a major milestone of the event, namely its 30th anniversary. The original Biofach, taking place all the way back in 1990, was held in Ludwigshafen instead of Nuremberg, in its Stadthalle (known today as Friedrich-Ebert-Halle). Branding itself as the “First European Trade Fair for Organic Food and Natural Products”, Biofach 1990 brought together a humble 2500 visitors and less than 200 exhibitors – quite modest by today’s standards, but enough to convince its organizers that there is, in fact, a need to have a dedicated European platform for bio-organic products and foods.

While the industry wasn’t particularly big in 1990, its growth was fast and explosive. Between 1994 and 1999, organically farmed hectarage in the UK increased eight-fold to meet steeply increasing demand, while countries like Austria, Italy, Ireland and Portugal saw five-fold increases. The situation in Germany wasn’t much different, and Biofach quickly became not just an important networking point for the organic industry, but an essential one for the entirety of the food market on the continent. The problem, of course, was that Stadthalle could only fit about 2500 people, and the needs of the show were rapidly expanding. As a result, in 1999 the expo took place in Nuremberg, which proved to be such a big success that only two years later Messe Nuremberg acquired the exclusive rights to host future editions of Biofach, providing the event with halls big enough to suit its needs.

But the venue would be far from the only change that the expo would experience. Around the mid-2000s there were arguments among the organizers on just how inclusive the show should be in regards to its products. Up until that point, the overwhelming majority of organic products presented at Biofach were food items – fruits and vegetables, drinks, snacks and sweets, fresh and frozen food, etc. But while that’s the largest organic sector by far, another – for organic make-up and beauty products – was quickly emerging and growing. Was Biofach supposed to include these products or retain a focus on organic foods? The solution was simple – organize a second fair to take place concurrently with Biofach Nuremberg, but focus exclusively on natural and organic cosmetics. In 2006, the first ever Vivaness took place, complete with its own exhibitors, hall, events and awards.

With a bigger venue and currently hosting two events in one, Biofach was quickly becoming far too big for its own, and it quickly became apparent that another, far more ambitious expansion was necessary. Remember that Biofach branded itself as the first European trade fair for organic foods, but what about the rest of the world? There were certainly some smaller events, but nothing quite to the extent of the Nuremberg-based Biofach. This led to the gradual opening of multiple new editions of Biofach around the world, starting with China in 2007 (more specifically in Shanghai) and gradually expanding to USA, Brazil, India, Japan and most recently Thailand as Biofach South Asia.  While initially modest success (Biofach China’s first edition gathered only 186 exhibitors), since then the events around the world have grown to bring together between 6,000 and 37,000 visitors per year.

One thing is clear – in its 30-year long history, Biofach has never stopped developing, expanding and growing in ways both big and small. And we couldn’t be more excited to see what the 20s will bring to one of the most exciting organic trade shows in the world!

Book Your Hotel Room for Biofach 2020